Celebrate Black History Past, Present and Future in Sanford, NC

Sanford and Lee County enthusiastically celebrates and acknowledges the accomplishments, struggles and history of African Americans. We also recognize that this rich history is very much still in the making. Local creators, leaders, activists and citizens continue to envision and blaze a path to a future that’s brighter, bolder, just and unapologetically their own. Embark on a journey with us to discover historical landmarks and figures, cultural and historical celebrations, living legends and future inspirations.

Built in 1927, the W. B. Wicker School began as The Lee County Training School to serve Sanford’s African American high school children. Arnold Lincoln (A. L.) Boykin constructed this one-story brick building, characterized by its large windows alternating with pilasters. Boykin was one of Sanford’s most prolific builders and a leading African American businessman of the early 20th century. In addition, he was responsible for many of Sanford’s historic buildings and homes. Some of his work still stands today in what is now the Rosemont-McIver Park Historic District.

Construction funds for the Lee County training school were provided in part by the Rosenwald Fund. This funding effort came about in the 1910s thanks to Southern Black leader and educator Booker T. Washington. Rosenwald schools like the one in Lee County were built across the South to advance the education of Black Americans.

In 1954, the school was renamed after its first principal and prominent educator William Bartelle (W. B.) Wicker. Wicker dedicated himself to a vision of excellence. Thus, he fought hard to bring culture and a sense of pride to his students who lived in a not so welcoming world .

Today the school, dubbed W. B. Wicker Elementary School, is Lee County’s first STEAM (Science, Technology, Engineering, Arts and Math) curriculum school. It provides students of all races a solid foundation for their education and futures.

Speaking of A. L. Boykin and W. B. Wicker, you’ll find a towering tribute to both men in the form of a mural called “Visionary Builders.” The art piece, created by muralist Scott Nurkin, sits at the corner of Wall St. and Horner Blvd. in downtown Sanford. It features larger-than-life depictions of both men flanked by both the W. B. Wicker School and a prominent historic house built by Boykin. Visitors and locals alike can check it out along with 12 other public art projects that make up the Sanford Mural Art Trail.

For the entire month of February, the Lee County Arts Council will host an art exhibit dedicated to African American artists. Additionally, artists featured in the show come from or reside in Lee County. With this showing, the Council continues to recognize them for the rich value they bring to our local community. The exhibit kicks off a month-long celebration not only of Black history, but also the future.

Paintings, crafts, culinary arts, music, poetry and more will inspire and move visitors who swing by the gallery space on Steele St. in downtown Sanford. Best of all, displayed artwork is available for purchase for anyone interested in taking a piece home.

Through this event and others, the Lee County Arts Council endeavors to show unity, respect and encouragement for the African American community not just during the month of February, but year-round.

Documentary: COVID Does Not Discriminate

A key highlight of the Lee County Arts Council’s African American art exhibit is the premiere of “COVID Does Not Discriminate.” This mini documentary explores COVID-19 and its effects on the Black community through one-on-one interviews, personal stories and stirring imagery and music. Produced by Antrell Mclean and local production company GHME Films, the piece sheds light on day-to-day struggles with the illness that many don’t often see.

You can catch the film in-person at the downtown Sanford gallery space or virtually on YouTube and Facebook.

Betty Mitchell, a fascinating local artist, creates striking works using graphite and charcoal. You can usually find her artwork hanging in the Lee County Arts Council gallery space. One such piece is a regal portrait of an African lady that exudes struggle, strength and quiet beauty. With a proud tilt of her head and a determined gaze in her eyes, both the drawing’s subject and her creator represent proud and accomplished women with their eyes set on the future.

Betty, who has loved art since she was a young girl, believes art is in everything. One just has to look closely enough and pay attention to the little details. As a longtime artist, she holds an Associates of Applied Science in Fine Arts degree from Ivy Tech College. She also attended the Fine Arts program at the University of Indianapolis.

In addition to her canvas work which includes oil and acrylic painting, Betty also creates sculptures and models using materials like chicken wire. She, along with many other African American artists, instills a creative, cooperative and inclusive spirit here in Sanford that grows stronger each day. 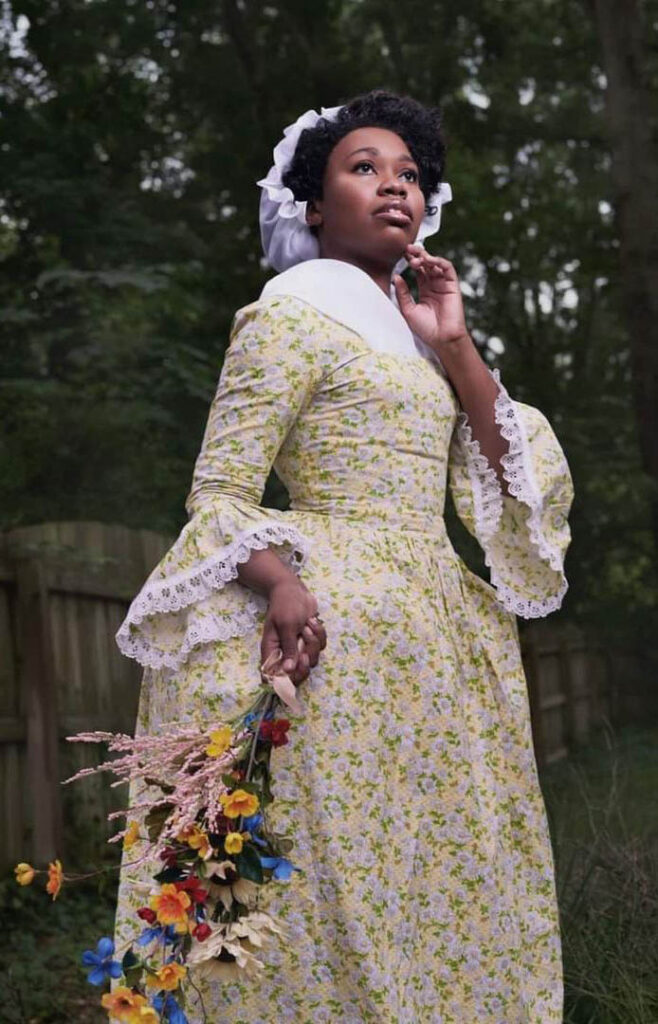 As an outspoken and inspiring creator, dancer and model, May Hemmer exudes a positively electric energy. A few years back, this Sanford resident moved here with her family from New Orleans. In Louisiana, May became known for her great costume design and cosplay, making regular appearances at comic conventions, burlesque shows and other so-called “blerd” (Black + nerd) events across the Southeast. Here in Sanford, she’s partnered with the Lee County Arts Council to display her many costume creations as well as to host virtual exhibits called “Ask the Artist.”

As a creative, Afro-Latinx woman, May strives to expand visibility of underrepresented groups in cosplay and nerdy spaces. In her career, she’s faced prejudice, stigma and outright racism. In spite of it all, she’s remained vigilant, visible and verbal on social media platforms, media publications and in person. May proves that the Black experience is not singular, but is multifaceted, nuanced and worth celebrating. 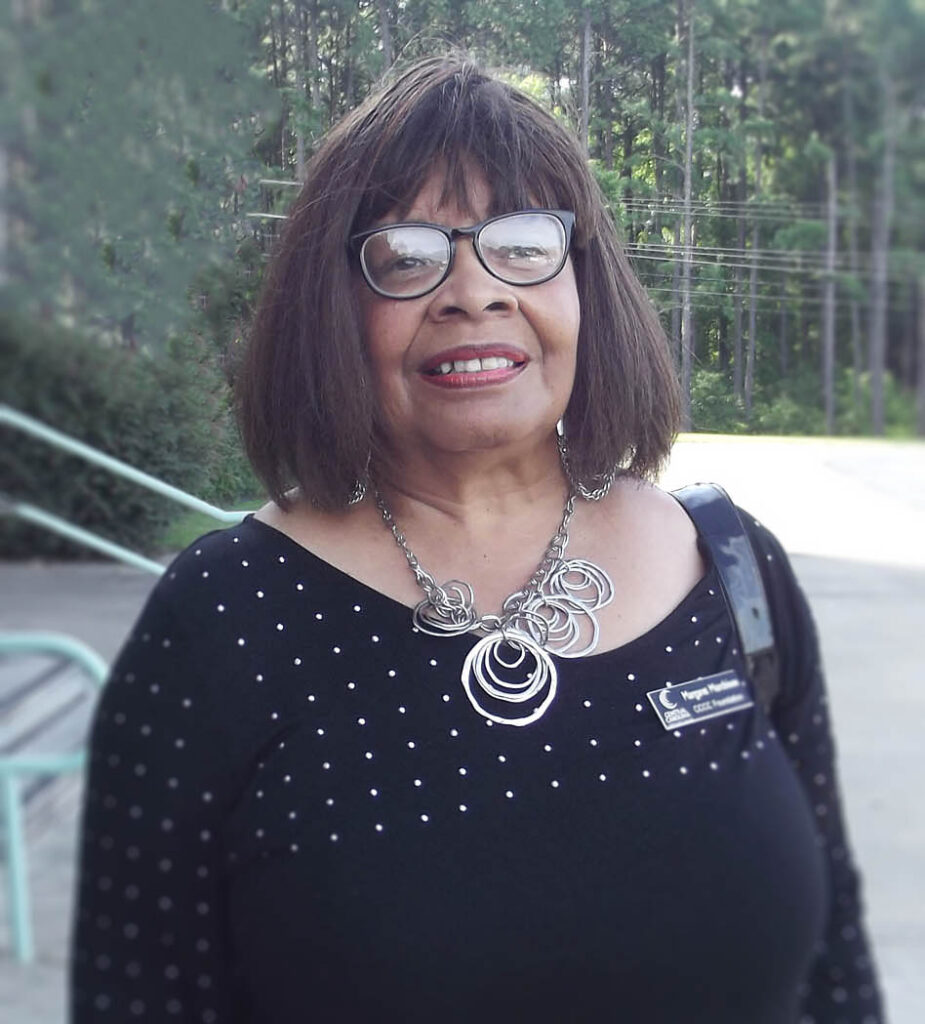 Margaret B. Murchinson is a news pioneer who’s been in the business 42 years. She became the first African American woman to serve as president of the North Carolina Associated Press Broadcasters Association. She also served as secretary treasurer of Radio Television News Directors for over 25 years. Today, she broadcasts the news on WWGP 1050 AM and WFJA FM 105.5 FM and has done so from the same building in Lee County since 1978. In a word, Margaret is a true classic.

Growing up, Margaret always had a knack for public speaking. For example, she loved speaking in church and school, competing in oratory contests and participating in theatre. One day a friend of hers mentioned that she should be in radio. At the time, she worked as a librarian assistant at Lee County High School. With her friend’s encouragement, she applied for a job at WWGP working under Frank James Abbott. There, she quickly discovered she enjoyed delivering the daily news and eventually became news director of the station in 1979.

Margaret has remained in the business of news radio for so many reasons. One, being the people she’s met and interviewed from all walks of life. Today, Margaret balances and relays the news on two important fronts among others: racial injustice and COVID-19. Both issues hit very close to home for her.

Margaret’s sister passed away from COVID-19 shortly after her 70th birthday. The death profoundly impacted Margaret’s life. It’s what drives and encourages her to continue informing and updating the public about the pandemic. Although the news on the virus continues to change rapidly, you can count on Margaret to stay current and report the latest to listeners in Lee, Chatham, Harnett and Moore counties.

Past, Present and Future Activist 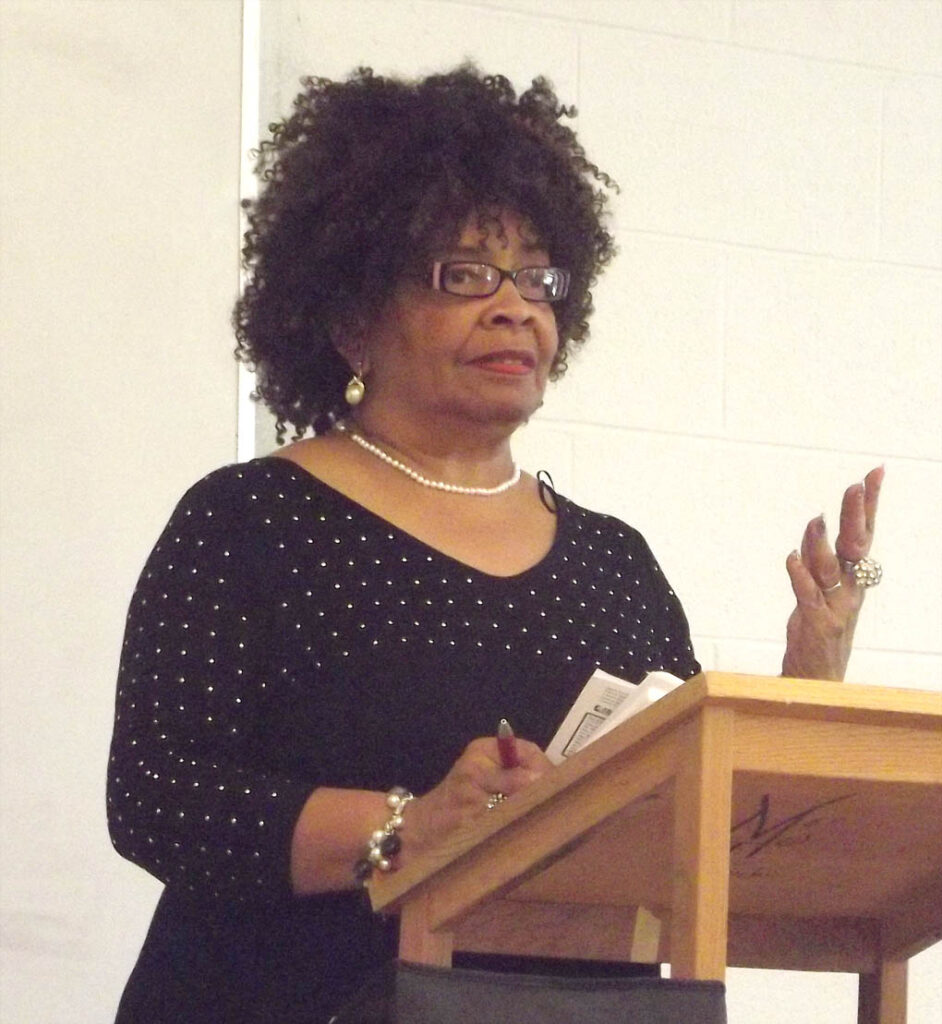 Photo by Central Carolina Community College
As for the continued struggle for racial justice, Margaret marvels at the timing of this renewed spotlight on injustice and the advent of COVID-19. The recent protests remind her of the days she spent protesting and fighting for African American civil rights in the sixties. At the age of 15, Margaret, along with her sister, joined the Lee County youth chapter of the NAACP. They began marching and participated in sit ins to peacefully protest the injustices of Jim Crow. She was even arrested on a couple of occasions. In her eyes, the fight for racial equality is just as worth fighting for now as it was then.

For more information on Black History Month events and celebrations, see our calendar at VisitSanfordNC.com or follow Visit Sanford on Facebook.

10 Must Do Experiences in Sanford, NC 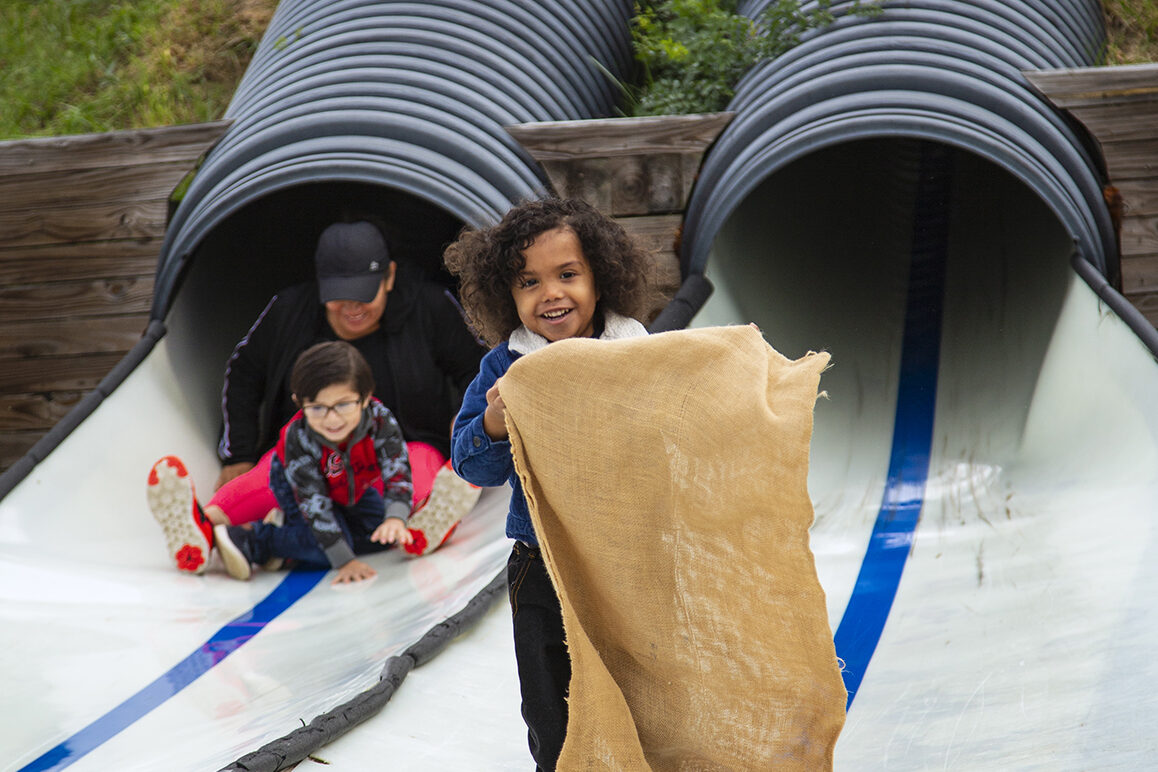 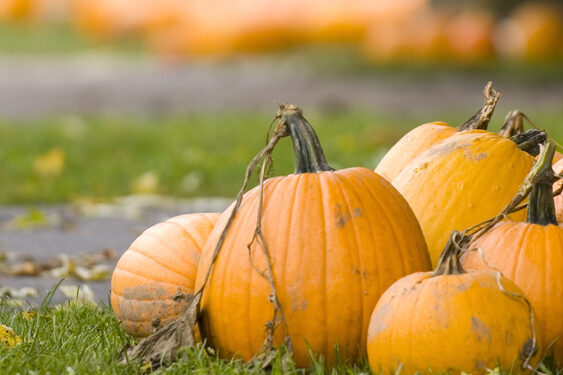 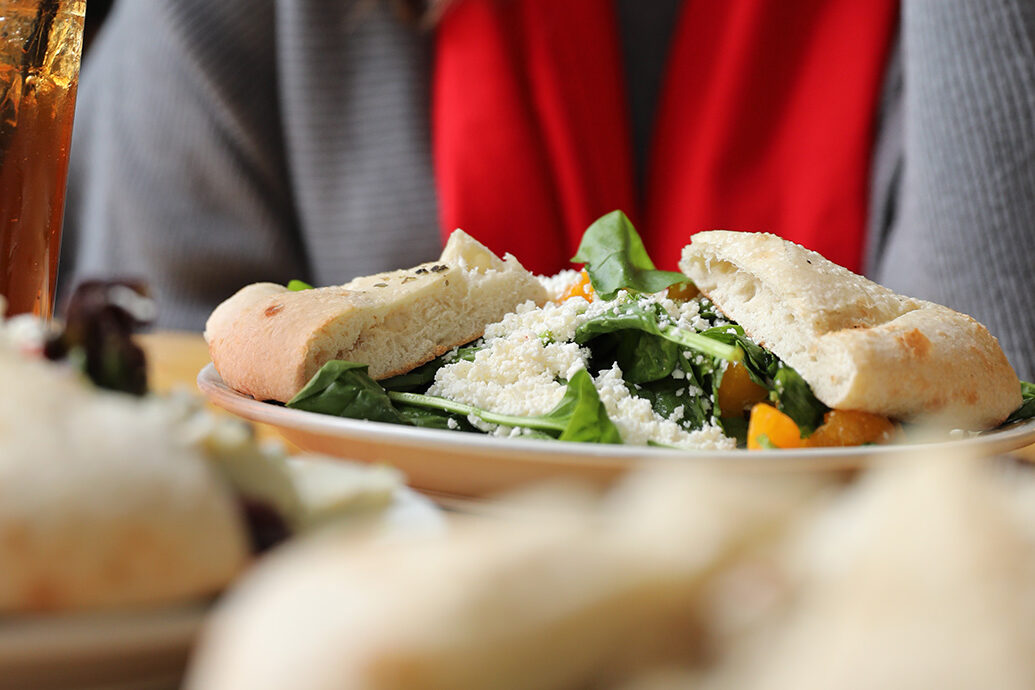